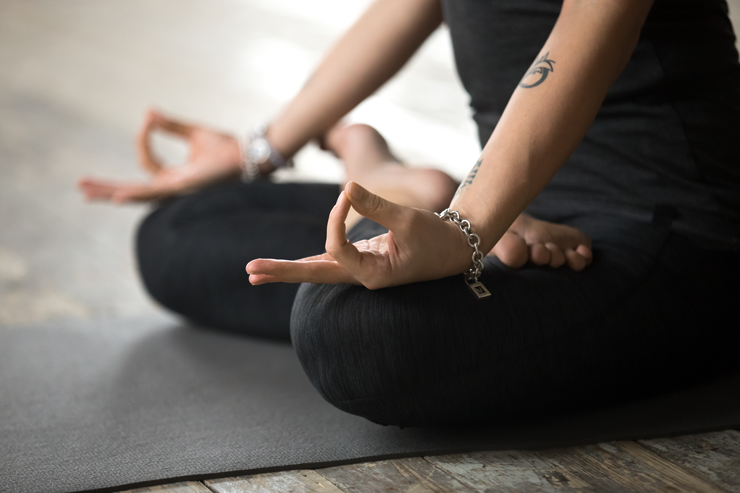 The Sanskrit word mudra is translated as gesture or attitude. Mudras can be described as psychic, emotional, devotional and aesthetic gestures or attitudes.

Yogis have experienced mudras as attitudes of energy flow, intended to link the individual pranic force with the universal or cosmic force.

The Hatha Yoga Pradipika and other yogic textx consider mudra to be a yoganga, an independent branch of yoga, requiring a very subtle awareness. Mudras are introduced after some proficiency has been attained in asana, pranayama, bhandha, and gross blockages have been removed.

Mudras are higher practices which lead to awakening of the pranas, psychic powers, on the advanced practitioner.

The attitudes and postres adopted during mudra practices establish a direct link between annamaya kosha, the physical body, manomaya kosha, the mental body and pranamaya kosha, the energy body. Initially, this enables the practitioner to develop awareness of the flow of prana in the body.

Ultimately, it establishes pranic balance within koshas and enables the redirection of subtle energy to the upper chakras, inducing higher states of consciousness.

The mudras can be categorised into approximately five groups:

Mudras are performed either in combination with or after asana and pranayama.

The Benefits of Mudras

Common Mudras in the Yoga Practice

When a yoga class begins, many teachers choose to bring awareness to the sitting posture, straight spine and breath. Besides getting into the right beginning asana, it is also common to use a mudra already. Especially if the class contains some mantra chanting, meditation and breath awareness. The most common mudra which is used is called Gyan Mudra or Jana Mudra. Simply relax your hands onto the knees, palms facing up. Now place the index finger towards your thumb so that both fingers touch at the top.

Gyan Mudra is an easy to perfom mudra that encourages focus and calmness. If the practiotioner has reached a certain level of awareness, he or she can feel energy circulating between the index finger and thumb. This mudra is also said to connect the individual to the universal consciousness and energy.

What is your favorite mudra so far?

nextWhy Pranayama is Much More Than What You Think It Is